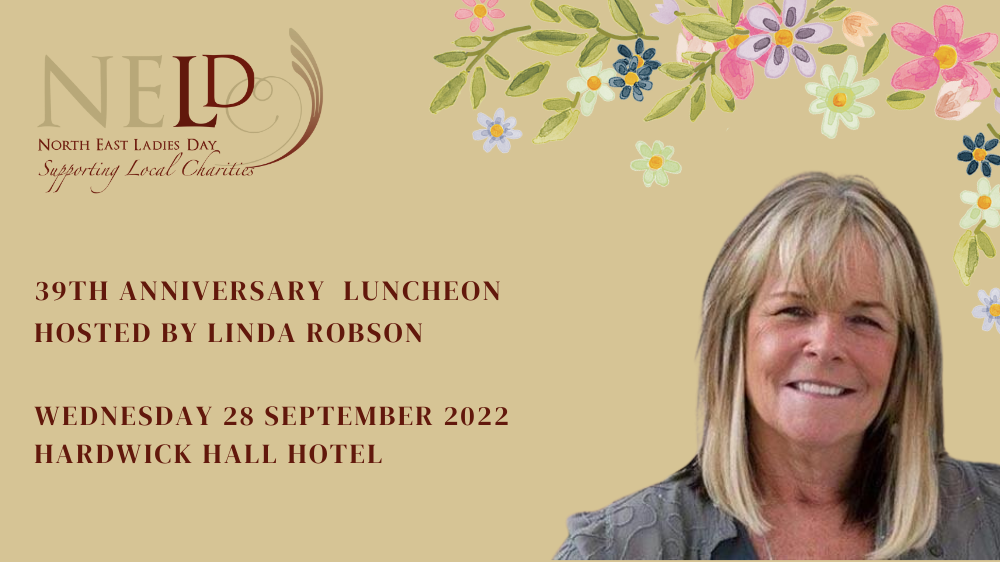 We are delighted to share that tickets for our next North East Ladies Day event, the Annual Anniversary Luncheon 2022, are now on sale. Buy your tickets on the event page.

This year we will have the sensational actress Linda Robson as your host.  Linda Robson is an English actress and presenter best known for her roles as a panellist on the daytime talk show, Loose Women and the figure behind Tracey Stubbs of the sitcom, Birds of a Feather. Her successful acting career has led her through to presenting and she is now a huge media star within the UK.

Our Annual Anniversary Luncheon will be held at the prestigious Hardwick Hall Hotel in their Grand Marquee.  Our event is an excellent opportunity to join 600 local ladies, friends and colleagues to meet in friendship.  We’ll have a beautiful 3-course lunch served with prosecco on arrival.  You’ll also have the opportunity to browse a large selection of interesting and beautiful stalls.  We will also have a fashion show and hear from the wonderful charities that NELD have supported, using your donations, over the last year.

All funds raised from this event will go to the North East Ladies Day (NELD) charity. NELD support other local North East charities and organisations with all donations.

Linda Robson is known for her lovable personality and a direct, bubbly speaking style, Linda is also becoming highly in demand as an after-dinner speaker and events host. Able to give interesting insights into the media world as well as interesting stories from behind the scenes of the nations favourite TV shows, Robson provides an engaging yet hilarious contribution to any event she attends. After becoming one of the founding students of Anna Scher Theatre School along with Pauline Quirke, Linda made her debut screen appearance on Children’s Film Foundation production, Junket 89. Also in her early career, Robson made her TV debut in the second series of BBC drama, Survivors. Following up from this, she appeared in The Crezz, Shine on Harvey Moon and Harry’s Game.

At the pinnacle of her acting career, Linda joined the cast members of Birds of a Feather in 1989. She starred as the main character and wealthy housewife, Tracey Stubbs for almost ten years before returning to the British sitcom later in 2013 for the tenth series. Around this time, Linda also appeared in Casualty, The Bill and Crossroads in addition to competing in Celebrity Masterchef and I’m A Celebrity… Get Me Out of Here!

Most recently, Linda is known for her weekly appearances on the highly regarded Loose Women panel. Alongside the likes of Stacey Soloman, Ruth Langsford and Coleen Nolan, Linda contributes to highly topical discussion and leads interesting debates surrounding current affairs. Having displayed a natural ability to construct the most interesting conversations on national television, there’s no questioning why Linda Robson is very quickly becoming one of the most in-demand event hosts on our books. A highly talented actress, popular presenter and loveable public figure, Linda Robson is guaranteed to create the most fun and memorable atmosphere at any corporate event, function or school assembly.